At this moment right now, my colleagues are having a lab meeting but I’m not there. I should have been there but I just can’t being myself to sit in and pay attention; even if we’re supposed to have pizza and other things after the meeting.

Lunch time has always been time for me to get away from work and relax. Time to be just me and having to attend a meeting during the time in the day that is one of the few things that helps mr get through a work day was just to much.

So here I am, sitting under the scorching sun, along the Sentosa boardwalk, with a book and iced coffee.

I can feel the sun burning through my t-shirt and even my jeans but I’m actually loving it. It makes me feel alive and happy.

I don’t think a lot of people will understand it but I needed this. I needed to get away. 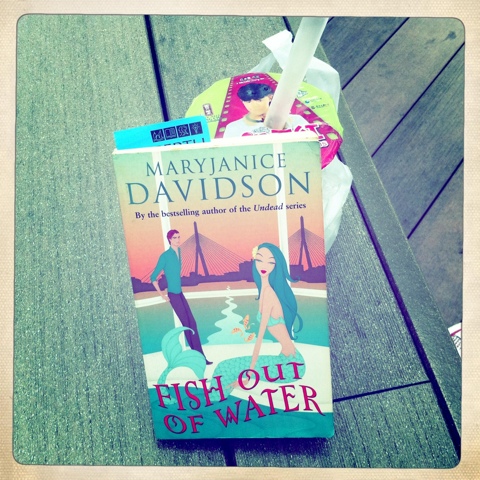 I’ve always wanted to get a Holga after reading about it and seeing how colourful they are. I love how the photos usually turn out. Having friends who love analogue photography only helped me want to get an analogue camera of my own. Among my group of friends, we have at least 10 different types of analogue cameras between us, with different lomograpy cameras, sardine can cameras and even instant polaroid cameras too. Now we can add a Holga to the list.

Dude keeps saying that I’m such a hipster but I don’t think so. I just happen to like the look of the camera and the effects that it has on the photos taken. I’m hoping that this little hobby won’t be a half baked one.

I’m just not a friendly, bubbly, cheery one in the morning. Who would be if you have to go through the morning commute from hell, every morning.

I like my mornings to be peaceful, quiet and only interrupted by the mournful sigh when the coffee’s gone. However, we don’t always get what we want and I’m just ‘lucky’ enough to have colleagues who don’t understand that giggling shrilly at nine in the morning is not really acceptable, especially when one has not had a caffeine boost.

Ok, so I might just be a grumpy bear in the morning. Doesn’t mean I don’t like people. I do. If they keep their damn mouths shut until I’m ready to deal with them.

Actually, I just happen to like peace and quiet at work at all times. So it grates on my nerves when one speaks in a loud voice, with a mouthful of food, and especially when it comes from a cute, young lady. It’s most unbecoming.

Couple that with another colleague who slurps his drinks and food, it does get annoying when it’s the only sound you hear other than the hum of the central air-conditioning and the infrequent sound of pages turning or phones going off.

I do try to drown out the sounds by listening to my own music but when they talk loud enough to be heard over Dethklok playing through my earphones, there’s something wrong there.

Maybe I should just move to another work place where I don’t have to deal with people at all.

Unless you’re a creep, then no.

So yes, it’s the Kick-off Party once again. I’m expecting cake, crisps, soda of some kind and most definitely, meeting new people and hanging out with the NaNoWriMo Old Timers.

Just RSVP here and come on over. Grab your friends along.

In case you didn’t realise, this is going to be one of the many annual NaNoWriMo posts. If you don’t know what that is, just click on the web badge on top.

Anyway, I do have a story in mind but I think I’ll be going into it half-heartedly since I don’t have a clear picture in mind, though that has never stopped me.

Most people see this as a way to start their novels, they will eventually edit and then try to get it published. Me, I just want to purge a story and try to reclaim the writing high, which I’ve been trying since the first complete novel.

What ever the motivation it is for writing, I wish all the participants good luck, have fun and try not to burn yourself out.

It’s the start of October and as always, I start planning and plotting for what I’m going to write for this year’s NaNoWriMo. While I revel in the high of writing, trying to squeeze some hours of writing when I can and trying to purge the story I have in my head, I never once talked about the good things that NaNoWriMo has given me.

NaNoWriMo was the first event that I went where I got to meet people whom I met online. I’d always thought that writing was a solo thing and that there weren’t people out there who are like me. I was pleasantly surprised that I was wrong and there they were, spouting quotes from Monty Python, Terry Pratchett and internet memes. For once I could talk about something and not get blank looks.

I met people with similar interests, similar sense of humour and it was liberating to finally be able to be myself without hiding the part of me that loves books, stories and movies.

NaNoWriMo gave me a chance to be part of a writing group. I got a story published and was party of a group effort in publishing a novel.

If it weren’t for this annual thing, I wouldn’t have met the wonderful friends I have now and through them, I met so many more awesome people. If it weren’t for them, I wouldn’t have discovered things that I love doing (even though I don’t have much time for them anymore), things that made me discover who I really am and to not give a fuck about what others think of me.

So yeah, NaNoWriMo is awesome. Not everyone understands why I love it but to each their own.

Rainy mornings. I love ’em. And hate ’em too.

Rainy mornings, especially when it’s storming, are the perfect mornings to sleep in. I love snuggling under the covers and listening to the wind howling and the rain lashing against the window. I especially love it when there’s s lightning storm and thunder is just booming, shaking even the apartment building. That mixed feeling of awe and fear is just lovely when you’re curled up in bed, warm and toasty while you know it’s wet and cold outside. However, rainy mornings are a bitch when you have to go to work. Even with the sheltered walkways to the train station, you get wet when the winds are strong enough to blow the rains horizontally.

Getting on the train is another matter as the trains would be slow and there would be a gajillion people at the train platform already since the trains are already so slow in arriving. Then, having to try to squeeze in with the rest of the island into those tiny train carriages, just to get to work.

For me, after getting off at the train station near the office, I’d still need to battle through the throng of people gathered at the bus stop. As the bus stop is one of the major bus stops in the area, there’s a heck load of buses and people there. Always. All the freaking time. Even when it’s not raining. When it rains, it gets almost impossible to get through the crowd without getting wet since everyone’s crowded at the centre of the shelter and the rest of us have to squeeze through the sides of the crowd, just to get to the other side. This also means that I usually end up getting rain water dripping not just on my head but down my shirt too, which I must say is totally uncomfortable.

So yeah, love rainy mornings when I get to stay home and sleep in but when I need to get to work, totally hate it.